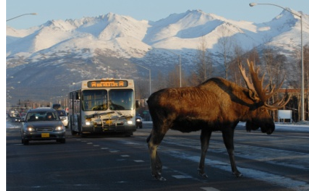 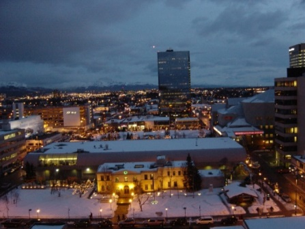 Alaska is the largest state in the U.S. that embraces a vast area of land that accounts for 1/5 of the U.S. land exempting Hawaii and Alaska. It is the northernmost and westernmost land as well as the easternmost land in the U.S. with the Aleutian Islands extends to the Eastern Hemisphere. Anchorage is the largest city in the state located South Central Alaska, on a strip of the coastal lowland and extends to the Chugach Mountains, and is nearly due south of Mount McKinley/ Denali, the highest mountain in the North America.

Anchorage was established in 1914 as a railroad construction port for the Alaska Railroad, which was built between 1915 and 1923.

On clear days, Mt. McKinley (6,194m) that is 379km north from the city center can be seen. Among approximately 100 thousand glaciers, Portage Glacier that is 72km south of Anchorage is one of the most popular glaciers in Alaska.

A diverse wildlife population exists in urban Anchorage and the surrounding area, and there are black bears, grizzly bears, Moose, Dall sheep, wolf, fox and kits live in the area. Beaver dams can also be spotted in local creeks.