*It is resolved, after exchanging opinions among mayors, to establish a subcommittee to continue research and to place a secretariat in Sapporo.

*It is resolved, after exchanging opinions among mayors, to establish a subcommittee to continue research and to place a secretariat in Prince George.

* Subcommittee secretariat cities made final reports of their research and studies.

Anchorage, U.S.A, was chosen as the host city of the 11th Northern Intercity Conference of Mayors, 2004 and the Winter Cities Showcase 2004.

1. In order to revitalize the development of the IAMNC as we enter the 21st century, we must reconfirm the basic principled upon which our association was founded, in conjunction with strong group efforts and an aim to expand the number of members.

2. The role of secretariat of the Subcommittee for Countermeasure against Natural Disasters to be newly assumed by the city of Prince George. Researcg period to extend up to four years. Overall increase in activity within subcommittees to be general association goal.

3. Winter City-related information/homepage of member cities to be linked to the newly established WinterNet in order to enhance efficient exchange of information.

4. The 11th International Northern Intercity Conference of Mayors will be hosted by the city of Anchorage.

5. Mr. Kjell Mickelsson, former mayor of Luleå, having made significant contributions to the development of the IAMNC, shall be granted honorary membership.

6. Ms. Ulla Ölvebro, mayor of Luleå, and Mr. Lars Tornman, mayor of Kiruna, who jointly hosted the 9th Northern Intercity Conference of Mayors, and the citizens of Luleå and Kiruna, who supported its conference, shall be greatly honored.

*25 businesses and 13 organizations participated from Hokkaido and Aomori, Japan.

*Specialists made presentations about energy, environment and building construction technology and opinions were exchanged between presenter and audience.

*Specialists made presentations about winter transportation and space research, and opinions were exchanged between presenters and audience.

Member Cities of the International Association of Mayors of Northern Cities 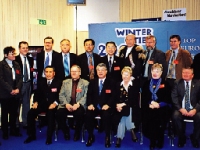