The 17th World Winter Cities Conference for Mayors (WWCAM Mayors Conference) was held in Sapporo for four days from July 27 to July 30, which 98 people from 32 cities in eight countries participated in. The very first Conference was held in Sapporo in 1982 and held here again for the first time in 34 years. During the early days of the Mayors Conference a series of discussions revolving around resolving issues in winter living were held: however, at the turn of the 21st century, global environment issues, which the world shifted its attention to, have been key issues in the Conference. In this Conference, based on “Winter City Urban Development: Uniqueness and its appeal” as the main theme, while aiming for the appeal of urban development distinct to winter cities, how to achieve and appeal this theme to the world was discussed in a frank manner. 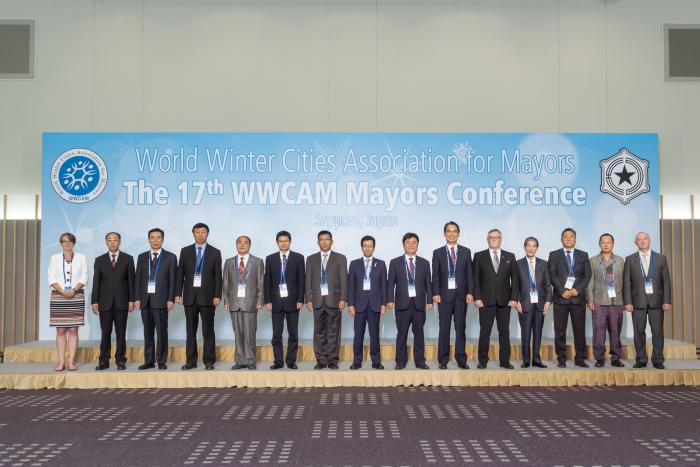 Fourteen case studies were presented by thirteen member cities during a two-day presentation session from July 27 to 28. Common problems and corresponding measures, which would be insight for their future development in a variety of ways, were introduced.

City planning based on the “Winter City Strategy” adopted in 2012 from Edmonton, Initiatives to utilize winter resources such as snow and ice for tourism from Jiamusi, Jixi, Qiqihar and Hwacheon, initiatives to utilize winter sports for winter tourism from Changchun and Rovaniemi, and case studies on the facility construction under severe climate conditions from Novosibirsk were introduced. Furthermore, the City of Sapporo which hosts the Mayors Conference made a presentation about city planning through hosting the Winter Olympics and Paralympics.

The innovative project to reduce food loss which the city of Matsumoto began in 2010, initiatives to improve the environment at water reservoir areas being implemented over a decade in Harbin, and initiatives with regard to the construction of environmental friendly buildings which the city of Shenyang has promoted from 2011 were introduced. The City of Sapporo made the presentation on eco-conscious sustainable urban panning in the downtown area. 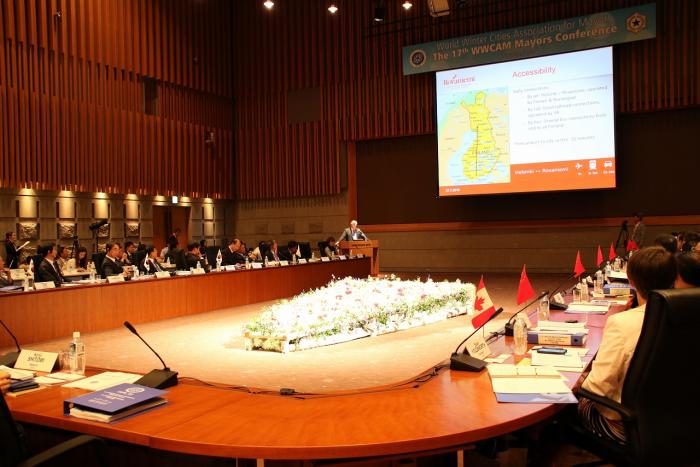 The scene of the mayor’s conference held in Sapporo 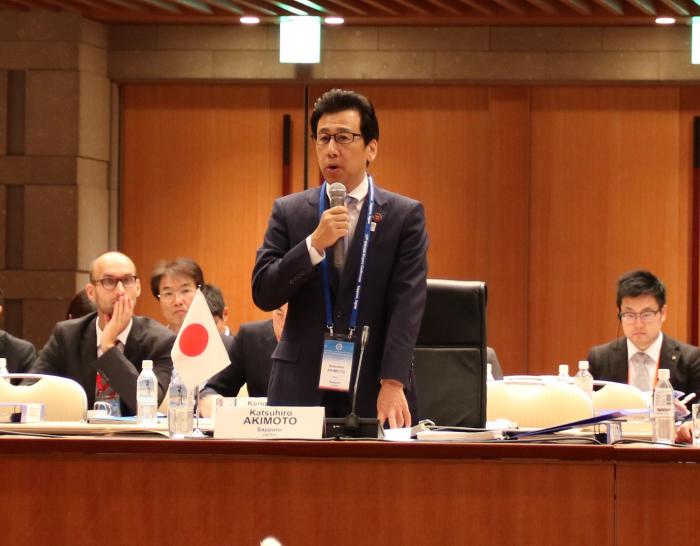 Mayor of Sapporo greeting at the opening ceremony

Based on the Declaration approved in the 16th WWCAM Mayors Conference held at Hwacheon in January 2014, cities that set their own action goals for environmental conservation gave reports and cities that did not set goals also introduced their initiatives.

In the Conference, continuing efforts relating to environmental preservation while each city will set a new action goal, and reporting their achievements at the 18th WWCAM Mayors Conference held in Shenyang in 2018 were decided.

Since the WWCAM was founded, the Mayors Discussion has been put on by the attending city representatives in order to provide an opportunity for mayors to learn from each other by candidly exchanging opinions on common issues that challenge winter cities.

Under the theme of “strategies to create economic vitality in urban areas,” opinions with various approaches were showcased, such as regional vitalization initiatives by using Sacheoneo Ice Festival from Hwacheon, vitalization initiatives through sports from Inje, and a scheme of corporate support from Novosibirsk, and it became a platform for active exchanges.

Presentation by Mayor of Copenhagen

Mr. Morten Kabell, Mayor of Technical and Environmental Affairs in Copenhagen, Denmark, introduced some of the city’s environmental and energy policies, such as the active use of wind power, biomass, and other types of clean energy. Copenhagen is well-known as one of the world’s leading cities in environmental energy sustainability. The following is the summary: Copenhagen has a vision to reduce a great amount of carbon emissions and become the world’s first carbon-neutral city (to achieve an equal amount of emitting and absorbing CO2) by 2025. It is essential for a city to be compact when aiming to be an eco-friendly and sustainable city, and district heating services play an important role in this. At present, district heating services in Copenhagen cover over 98% of the city’s buildings, which is the world’s highest coverage rate. Being environmental friendly is not necessarily costly. From 1994 to 2010, economic activities in this region increased by 25%, while greenhouse gases were reduced by 40%. Copenhagen’s strong economy was a contributing factor to the green transformation. 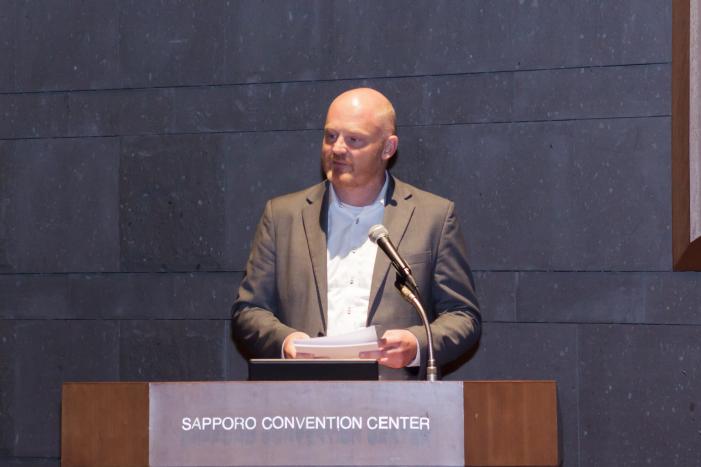 Mayor of Copenhagen in charge of technology and environment

Director Kondo, UNDP Representation Office in Tokyo made a presentation about the overview of “Sustainable Development Goals (SDGs)” adopted in the UN last year, and international cooperation on regional development among local governments. The following is the summary: SDGs is composed of 17 goals and 169 accompanying targets, including “end poverty,” “end hunger,” “take urgent action to combat climate change and its impacts,” and “ensure access to affordable, reliable, sustainable and modern energy for all,” which require both developing and developed countries to take their own action. To achieve the SDGs deeply affects not the United Nations and countries, but also local governments which are directly connected to the lives of local residents. Before becoming Director of the UNDP Representation Office in Tokyo, Director Kondo worked as UNDP Deputy Resident Representative in Kosovo, the former Yugoslavia, and UNDP Country Director in Chad, Africa. In these countries, the policy of promoting decentralization was commonly in progress for country development. Currently, “local governmental cooperation among local governments” has been popular in the world. Knowledge, manpower and other resources possessed by local governments are needed across the world, and they have been exchanged, producing successful results. Director Kondo hopes that all the mayors and other staff who have gathered at the 17th WWCAM Mayors Conference will consider what they can do to achieve the 17 Sustainable Development Goals and will take action through daily administrative tasks and operations. 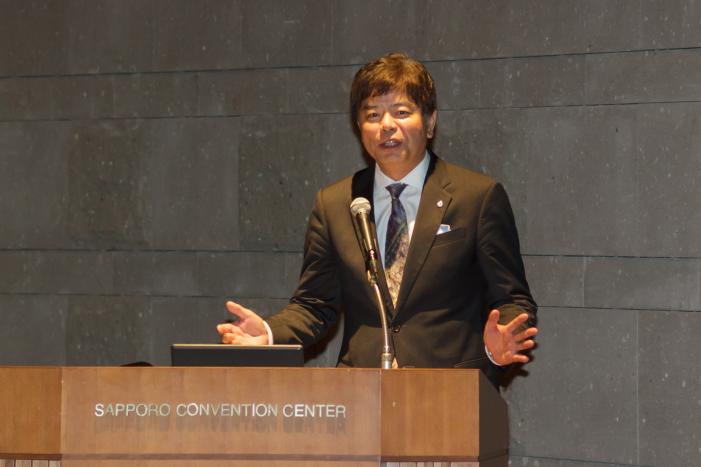 Representative of UNDP’s office in Tokyo

Mr. Bayarbaatar Sandagdorj, Director of the Strategy Policy & Planning Department, Office of the Capital City Governor, Ulaanbaatar, our Member City, reported a Firefighting Technical Support Project as an example of the effectiveness of the WWCAM network. While the construction of high-rise buildings has increased due to rapid population growth and urbanization, this project was carried out from 2013 to 2015 using “grass-root cooperation project” by JICA to develop countermeasures to cope with large-scale disasters such as fire in high-rise buildings. By holding WWCAM Mayors Conference in Ulaanbaatar in 2012 as a momentum, this training is being implemented between the two cities, and produced successful results.

Students in the third grade of Sapporo Kaisei High School, which was designated as a Super Global High School by the Japanese Ministry of Education, Culture, Sports, Science and Technology with the aim of fostering global leaders who can play an active role in the international community, presented the proposal on the effectiveness of using theater for city development as showcasing case studies on city planning from the point of view of the young. While theater has three strengths, “communicative art,” “a living art,” “art created by citizens,” junior high/high school students performed a play about a local issue. For the play, a professional director was invited to the school, and students performed the play around the theme of organized fraud in front of local elderly people. The local elderly people who actually watched the play commented: “Theater leaves a strong impression and facilitates interaction between different age groups.” The play achieved a greater success than expected.

Sapporo Declaration and the Resolutions adopted

To close the Mayors Conference, the General Meeting was held and the Sapporo Declaration and the 17th World Winter Cities Conference for Mayors Resolution, proposed by City of Sapporo and the Secretariat, were adopted by unanimous approval of all participating Member Cites. After being signed by representatives from participating cities, Mayor Akimoto of City of Sapporo, who is the host of the Conference, signed the Declaration.

Throughout discussions in the Conference, it was reaffirmed that the distinguished uniqueness of winter cities are strong sales points to develop city planning, and the WWCAM network, along with the cooperation of Member Cities, could be taken advantage of for city planning.

Furthermore, we also reaffirmed that this network, which has been fostered beyond the difference of countries and cultures, would help to solve a wide range of international issues, while commitments by each Member City would lead to solve the global issues such as environmental preservation.

Following comments that some participating cities made, such as “I learned about similarities among winter cities as well as the contrasts” and ”it is very important to share knowledge and experiences to search the solutions to a better life in harsh climate conditions,” Mayor Akimoto concluded that “while our association started from sharing wisdom to overcome winter challenges such as the cold and snow, we were able to share a new idea to promote intercity cooperation from a broad perspective, such as to tackle global environmental issues” and adjourned the Conference.

Possessing a thirty-four year history, the World Winter Cities Association began here in Sapporo with the Northern Intercity Conference of Mayors in 1982.
Facing the many challenges presented to cities in cold and snowy regions, we members of this Association have striven to advance winter city development through the sharing of wisdom and experience among our many fellows, coming to solidify our bond.
While distinguished for the signature snow and cold associated with their namesake, winter cities additionally possess charms lesser witnessed by other regions, such as being favored by four distinct seasons and contrastively brilliant summers. Leveraging these features, it is our mission to create cities in which our citizens take joy in living.
Making full use of our World Winter Cities Association for Mayors network, we continue taking our winter city development to the next level by overcoming nationality and status to understand our cultural differences, connect and cooperate in the spirit of friendly competition.
Not limited to the resolution of issues faced narrowly within our own cities, we hereby affirm that our activities within this Association may also contribute to the resolution of environmental issues and other challenges global in nature – activities that are indispensable for shaping the future of this planet.
Moreover, it is our hope that this network of winter cities, which has built up borderless relations of trust and cooperation over the course of its more than thirty years of continued activity, may assist the resolution of multifarious international conflicts involving complex grapples of differing cultures and interests.
Given the above, we winter cities hereby declare our commitment to further deepen our allied efforts and aspire for our organization to be a leader to the world’s cold and snowy cities, taking together another stride forward into the future here from the grounds of the very birthplace of the World Winter Cities Association for Mayors.

In the report, case studies such as a new economic model “Circular Economy” focusing on reusing resources and delivering added values toward products from Rovaniemi, “Hot tour in winter” which includes visiting venues in the city based on the historical documents and traditions from Novosibirsk, and “International Cross Country Skiing Festival” which has been conducted over 10 years by Changchun were introduced. Based on the result of questionnaire, to deepen the understanding for the design and share successful case studies on city planning were confirmed.