2. Discuss details of the revitalization plan at a Working-Level Officials Meeting and hold the first meeting within the year 2002.

3. Hold “Cooperative Tourism Promotion” within the year 2002 as the pilot project of the revitalization plan.

Anchorage proposed the establishment of a subcommittee to investigate measures against terrorism in northern cities, and it was decided that the secretariat for the subcommittee would be based in Anchorage to coordinate activities.

Theme: “Implementing Sustainable Futures in Cities” – Lessons from Policy and Practice –
Lecturer: Professor Colin Fudge, Vice Chancellor and Dean, Faculty of the Built Environment, University of the West of England

Sectional Session B: “Urban System with the Less Negative Impacts on Environment”

Sapporo: “Sapporo Basic Environmental Plan,” “Practical Cases of Efficient Use in Sapporo” – District
heat service utilities and cooling projects in urban area –
Takikawa: “Practical Cases of Efficient Use in Takikawa” – Methane gas generation
*Cities traded introductions about their own situations and discussed what kind of city system planning winter cities should take up in order to reduce the burden on the environment.

・While holding comprehensive discussions based on the reports from Sectional Sessions A and B aiming at “Sustainable City Planning,” a Joint Statement was proposed aiming toward the theme of the conference
“Sustainable Winter Cities 21.”

・Aomori proposed the establishment of a subcommittee to investigate effective measures for sustainable city planning, and it was decided that the secretariat for the subcommittee would be based in Aomori to coordinate activities.

Information was mutually exchanged about the discussions at the Mayors Conference and Winter Cities Forum. The Aomori Conference was concluded overall, and a Joint Statement was proposed at the Plenary Session.

Secretariats from the subcommittees presented their interim reports.

Selection of the Host City for the 12th IAMNC Conference

It was decided that the city of Changchun in China would be the host city for the 12th IAMNC Conference in 2006.

We, the member cities of the International Association of Mayors of Northern Cities, will cooperate with each other and make the greatest efforts possible in order to realize “winter cities that ensure sustainable development” while
reaffirming our fundamental principle of “winter is a resource and asset” and revitalizing our activities. We also call for all people of northern regions to take on the challenge of constructing cities that ensure sustainable development.

Main theme: Northern Lifestyle and the Industry and Life of Winter Cities

Theme: “Coexistence Between the Earth and Humanity: Examining Lifestyles of the 21st Century”
Lecturer: Mr. MOHRI Mamoru, Director of National Museum of Emerging Science and Innovation/Astronaut

*Eight city planning & lifestyle forums were held based on the key words of “energy,” “community design,”
“lifestyle,” and “traffic.”
*Two citizens forums were held with the themes of “Possibility of YUKIGUNIGAKU” and “KE-YA-GU: Ideal Relationship for Promotion of Genderequal Society.”

Events held in conjunction with the Conference

Member Cities of the International Association of Mayors of Northern Cities 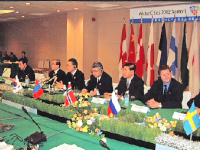