Report in the 2015 Working-Level Officials Meeting in Sapporo

The final report on activities of the WWCAM Promotional Project, which was approved at the 2010 Ulaanbaatar Working-Level Officials Meeting and overseen by Hwacheon, South Korea for four years from 2011 until 2014, was presented.

Held in parallel to Hwacheon’s famed Sancheoneo Ice Festival, the WWCAM exhibition space was set up to introduce member cities and promote the activities of the association. In January 2014, it was set up at the main venue for the festival, the Eolgomi Castle, reaching 540,000 visitors, the most ever. This revitalization project was officially completed in 2014; however Hwacheon took the initiative to continue hosting the WWCAM exhibition space once again in 2015, seeing 580,000 visitors to the square. 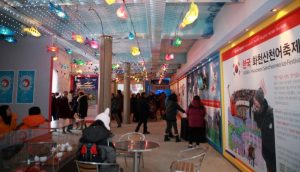 The WWCAM exhibition space in 2015

Report in the 2013 Working-Level Officials Meeting in Sapporo

During the Sancheoneo Festival in January 2013, a promotional booth was set up to introduce the WWCAM, its activities, and members. In addition to many displays, tea was served to overseas visitors and national costumes were available for visitors to try on. There were activities that visitors could not only observe but experience. During the festival, about fifteen thousand people including Hwacheon residents visited the WWCAM exhibition space, a great opportunity to inform people about the WWCAM member cities. Hwacheon discussed plans at the WLOM to have a similar event at the Sancheoneo Festival in January 2014.

Public information center set up in the WWCAM exhibition space 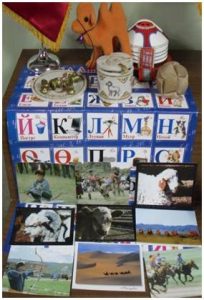 Report in the 2012 Working-Level Officials Meeting in Hwacheon

At Hwacheon’s annual Sancheoneo Ice Festival in January 2012, the activities of WWCAM member cities were displayed on twenty panels at an WWCAM exhibition space at the festival. The exhibit had more than 36,000 visitors from Korea and abroad, who enjoyed viewing the panels and had special interest in the WWCAM member cities with similar climates and living environments, as well as cities’ experiences as members of the WWCAM.

A report on Hwacheon’s WWCAM PR Project as well as the project’s future was approved at the 2010 Working-Level Officials Meeting in Ulaanbaatar. Revitalization projects of the WWCAM will be organized at the Sancheoneo Ice Festival in 2013 and 2014 as well.

Report in the 2011 Working-Level Officials Meeting in Sapporo

Hwacheon, Republic of Korea, reported on activities that the city has conducted to date as well as future plans for the WWCAM Member Cities Project, which was approved at the 2010 WLOM in Ulaanbaatar.

As part of PR Project activities, winter-related items such as traditional costumes and clothes, dolls, crafts, posters, and pamphlets were displayed at a WWCAM PR Zone from January to February 2011. Hwacheon also organized a World Winter City Symposium on January 15, 2011. Twenty participants from seven cities including WWCAM member cities discussed the important benefits that festivals bring to local economies.

The WWCAM Member Cities PR Project will continue until 2014, and a PR Zone will be established annually at a Sancheoneo Ice Festival in January. In addition to the Ice Festival, items provided from member cities will be displayed at another location throughout the year. Hwacheon expects more member cities to participate in the project next time. 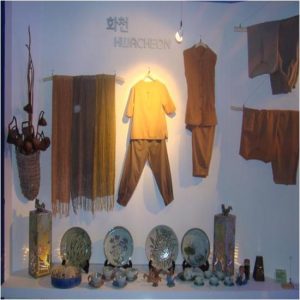 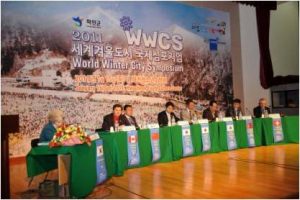