The 14th World Winter Cities Conference for Mayors was held over a span of three days with “Features of Environmental Protection in Northern Cities” as the main conference theme. The Mayors Conference, which is the central part of the conference, was held in the afternoon of January 21 and the morning of January 22. Case studies were given by participant cities, and ideas and opinions were exchanged.

During the Mayors Conference Session 1 in the afternoon of January 21, a discussion on environmental protection activities was held.

At the opening of the session, Mayor Georgy Bystrov of Maardu explained his aim in selecting this discussion theme by pointing out the importance of promoting environmental protection without hindering economic development. Dr. Juri Martin reported current environmental conditions in Maardu and mentioned that more human resources specialising in the field of sustainable development were needed and that this was a common challenge faced by countries across the world. In a guest presentation, Mr. Erik Teinemaa (Ministry of the Environment of Estonia) reported on the Estonian government’s efforts to minimize the number of complaints from residents in the Muuga/Maardu area by introducing an air quality management system at the Muuga Harbor.

The City of Harbin reported that environmental issues had become more visible in the city with the progress of urban development, and that they aimed to become a nationally-recognized environmental protection model city during the country’s 11th Five-Year Plan.

The Mayor Ueda of Sapporo reported on the city’s approaches towards combating global warming, including examples of its vigorous efforts to introduce renewable energy sources (e.g., snow cryogenic energy, solar energy, woody biomass) and promote waste reduction and recycling. He also mentioned that Sapporo had been sending a message on the environment to the world through its initiatives such as the Sapporo ‘Eco-Capital’ Declaration or by hosting international events including the Children’s World Summit. At the Sapporo International Short Film Festival and Market, the city now gives an environment award to an outstanding environment-related film.

The final presentation of the day was from Anchorage on their LED outdoor lighting initiative. The city has installed 4,000 LED streetlights, which accounts for one-quarter of their total (16,000 lights), saving about $350,000 per year.

During the Mayors Conference Session 2 on the morning of January 22, case studies were presented on the topics of a multicultural society and the E-state in relation to sustainable development.

In the first half of the session focusing on a multicultural society, Ms. Anne-Ly Reimaa (Cultural Heritage Department of Estonia), who served as the facilitator of the session, mentioned that cultural stability and a society in which people are allowed to be involved in politics are important elements for the development of a country, and that these elements are the basis of a variety of projects, including those in sustainable development.

In the second half of the session, focusing on the E-state, Mr. Margus Puua (RISO, Ministry for Economic Affairs and Communications of Estonia) said that progress in computerization would help us prevent the waste of resources. He reported on the efficient functioning of the public sector using IT solutions (e.g., electronic voting) in Estonia. An Estonian Let’s Do It cleaning campaign, in which volunteers have collected 10,000 tons of illegal dumping in forests, was also reported on. Volunteers had researched waste dumping sites and posted marked maps on the Internet, making such information available to the general public. The media and actors helped to recruit cleaning volunteers and in the end 50,000 people joined the event. Garbage dumped illegally was collected in just one day.

The City of Tromso introduced its on-line services that they provide to residents. The city receives information of damages on roads or to street lightings from residents and makes such information publicly available on its website. Residents are able to find information on what is underneath of the ground within their property (e.g., water pipes) and garbage collection calendars for their resident areas by typing in their address at the city website.

Adoption of the Maardu Declaration

In the morning of January 22, a plenary session was held to conclude the 14th World Winter Cities Conference for Mayors. In the session, the Maardu Declaration proposed by the City of Maardu was unanimously adopted and signed by the Mayor of Maardu and the Mayor of Sapporo (President of the WWCAM).

With the Maardu Declaration, member cities have confirmed that winter cities are the ones who play a leading role in international society in the battle against global warming, and that they must work on immediate environmental issues as organizations closer to the people. With sustainable development as a key concept, member cities share the need for their own active involvement in the creation of unique winter cities.

At the Plenary Session on January 22, Hwacheon of Korea was officially announced as the host city of the 16th World Winter Cities Conference for Mayors in 2014.

Establishment of a New Subcommittee

At the Plenary Session on January 22, Changchun presented their proposal to establish a new subcommittee (tentative title: Subcommittee on Environmental Protection) and the proposal was approved by the participant member cities. The new subcommittee will operate for four years and the subcommittee secretariat will be Changchun.

The impact from global warming is most visible in winter cities. On the other hand, due to climatic features of cold weather and heavy snowfall, winter cities consume enormous amount of energy for heating and snow removal operations and increase the impact on the environment. With this self-contradiction in mind, the World Winter Cities Association for Mayors believes that winter cities should be the ones who take the initiative in approaching global warming within the international community.

How can we protect our precious Earth and leave it to future generations? At the national level, this international issue is being discussed. The 2009 United Nations Climate Change Conference in Copenhagen (COP15) also put great emphasis on this. We, local governments as organizations which are closer to the people, must work hard on this urgent challenge. As we approach this issue, it is necessary to consider it ethically as well as technologically. Sustainable development means that resources are used reasonably and the carrying capacity of ecosystems is taken into account, thus ensuring improvement in the quality of life of us and our children. A sense of living in harmony as global citizens is important for the future of the Earth and the human race, and acceptance of and respect for other cultures are essential elements. The use of electronic media for providing information to the people increases citizen’s awareness and the knowledge of public administration. A secure service space will be developed for citizens, allowing them to use public services and communicate in the same environment both with the state, businesses and other citizens. Electronic information can become a powerful tool for city development under conditions where natural and human resources are limited.

The World Winter Cities Association for Mayors takes full advantage of its network and continues to lead the world in tackling global warming in order to leave a better environment for future generations, through the valuable actions of the Subcommittee on Winter City Environmental Issues and the Subcommittee on City Operations for Mitigation of Climate Change and their proposals. With Sustainable Development as a key concept, we hereby pledge our continued vigorous involvement in developing our unique winter cities. 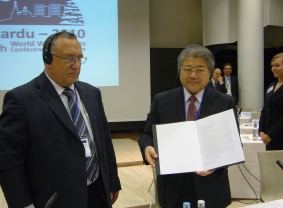 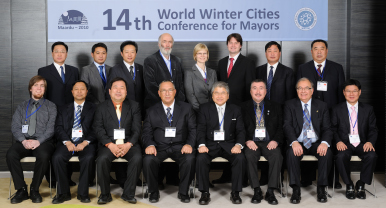