The Working-Level Officials Meeting (WLOM) of the World Winter Cities Association for Mayors (WWCAM) was held in Sapporo on August 1 and 2 to hear and to discuss plans for the sixteenth Mayors Conference, which was hosted by the city of Hwacheon, Korea, in January 2014.

(2) Revitalization project report by the city of Hwacheon, Korea
Hwacheon gave a report on its WWCAM PR Project.

(3) Interim report on action goals for environmental protection
The results of efforts were presented in an interim report at the Sapporo Working-Level Officials Meeting.

(4) Discussion on the operation of the WWCAM

(5) Introduction of a new WWCAM member city: Inje, Korea
The city of Inje, which became a member in June 2013, gave a presentation on their city.

A meeting of the WWCAM Environmental Protection Subcommittee was held during the Working-Level Officials Meeting, and Changchun, China, the subcommittee secretariat, made a presentation.

Report from the Environmental Protection Subcommittee

tourism and the environment” by Associate Professor Shinichi Ikenoue of the Hokkaido University Center for Advanced Tourism Studies. The lecture was offered through the United Nations World Tourism Organization (UNWTO) Regional Support Office for Asia and the Pacific and was an effort by the WWCAM to strength relations with UN-related organization. The WWCAM is an NGO in Consultative Status (Roster) with the Economic and Social Council of the United Nations.

As an example of developing regional connections utilizing tourism as a tool, Mr. Ikenoue cited “the Marine Silk Road”, which is being promoted by the UNWTO, and noted three key areas of activities: 1) marketing and promotion; 2) capacity building and destination management, such as conservation of natural environments and cultural preservation; and 3) promotion of tourism visa and improvements in infrastructure on borders.

In addition, Mr. Ikenoue noted that tourism is an important means for teaching cultural diversity, and helps to strengthen the social connections among regions. 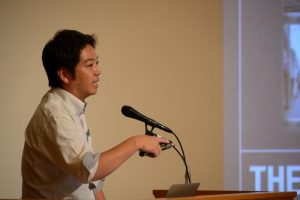 Shinichi Ikenue discusses the harmony of tourism and environment.

1. World Winter Cities Festa 2013
Representatives of participating WWCAM members promoted the attractions and allure of their cities at the Sapporo Underground Walkway Square to passers-by and others interested as part of World Winter Cities Festa 2013. A seminar on the economy of Mongolia was also organized, with lecturers from Ulaanbaatar (a WWCAM member city) and from the Japan International Cooperation Agency (JICA).

In addition, United Nations organizations, such as the activities of the UN High Commissioner for Refugees (UNHCR), were introduced with panels and leaflets. As an NGO in Consultative Status (Roster) with the Economic and Social Council of the United Nations, the WWCAM has interest in the UN.

2. Participation in “Eco Plaza Sapporo 2013”
The WWCAM took part in the Eco Plaza (Kankyo Hiroba) Sapporo 2013, which was organized at Axes Sapporo from August 2 to 4, and introduced environmental protection activities of member cities. WLOM participants visited the event site and viewed with keen interest the displays of environment-related techniques and technologies. 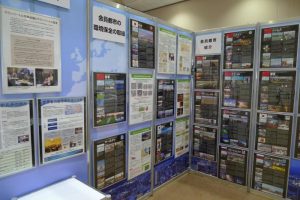 Exhibition booth on the WWCAM 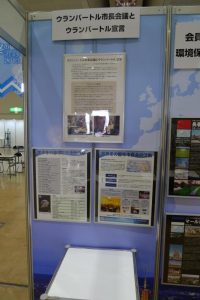 Introduction of the content discussed at the Ulaanbaatar Mayors Conference (held in Jan. 2012) which was themed around environmental protection)