The Working-Level Officials Meeting (WLOM) of the World Winter Cities Association for Mayors (WWCAM) was held in Sapporo on July 30 and 31 to listen to and to discuss plans for the seventeenth Mayors Conference, which will be hosted by the city of Sapporo, Japan, in July 2016.

(2) Revitalization project report by the city of Hwacheon, Republic of Korea
Hwacheon gave a final report on its WWCAM PR Project.

As subcommittee secretariat, Rovaniemi (Finland) announced the activity plan for the Subcommittee on Arctic Design which was newly established in February 2015.
The contents of the plan, please refer to the following page.

The activity plan for the Subcommittee of Arctic Design

As the 18th host city of the World Winter Cities Mayors Conference to be held in 2018, there was a candidate from Shenyang (China). There was the presentation of the held plan at WLOM, at a later date, it has decided officially held in Shenyang.

In accordance with WLOM, the events were held to introduce member cities activities and of WWCAM.

1.  World Winter Cities Seminar
This seminar was held on July 30 at Do-Box in downtown Sapporo to promote the attractions of member cities directly to Sapporo residents. Citizens attended the presentations given by WLOM participants and listened with enthusiasm. 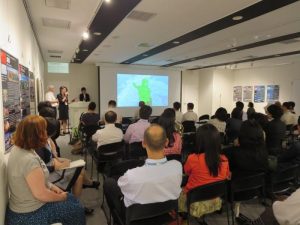 2. Booth at Eco Plaza Sapporo 2013
From July 30 to August 2, WWCAM opened a booth at the Eco Plaza Sapporo 2015 held at Access Sapporo to showacse WWCAM activities and environmental protection initiatives carried out by Member Cities, as well as introduce model cases of member cities making use of information gained from discussions at the Mayors Conference.