At the 12th World Winter Cities Conference for Mayors (WWCAM) held in Changchun, China in January 2006, it was resolved to establish a “Subcommittee on Winter City Environmental Issues” with the aim of studying environmental issues that are of concern to winter cities.

Based on the Changchun Declaration adopted at the Conference, the Subcommittee hopes to gather information about the kinds of environmental problems member cities are facing so that the data can be shared among them to improve winter city planning.

The Secretariat of the Subcommittee was located in the city of Sapporo. (completed in January 2010)

The first meeting of the Subcommittee on Winter City Environmental Issues was held in Nuuk, Greenland in conjunction with the 2006 Working-Level Officials Meeting of the WWCAM. Representatives of seven cities of six countries attended the meeting and discussed how to manage the subcommittee.

Outline of the meeting
Based on the Changchun Declaration adopted at the 12th Mayors Conference and on the results of the questionnaire conducted before the first meeting, the subcommittee agreed to make “global-scale environmental issues” the theme of its study.

The two years between the Nuuk conference and the 14th Mayors Conference in Prince George in 2010 will be devoted to “practical action toward environmental issues,” and the subcommittee will disseminate the information worldwide by way of collaborative campaigns and other means.

Reports from the member cities

Representatives of Nuuk, Greenland; Anchorage, U.S.A., and Taebaek, Korea made presentations on their environmental policies. The following is an excerpt of the presentation by the city of Anchorage.

Anchorage made a presentation on environmental issues, focusing on the issue of global warming.

The effects of global warming include melting ice, glaciers, and permafrost in Alaska. As a result, polar bears drown because there is less sea ice for them to swim to. Also, abandoned walrus calves have been discovered because of a lack of food resulting from increased water temperatures. There are other serious ecological problems as well, such as new types of salmon diseases.

The city also promotes the recycling of cooking oil by blending small amounts of it with diesel oil for use as vehicle fuel, and Anchorage has a program that recycles glass by crushing it into a fine sand-like form to use for traction on railroad tracks.
In addition, the city is constructing a new convention center that will be a state-of-the-art model of energy efficiency. The Center will utilize innovative heating, ventilation, and air conditioning systems. It is expected that the new design will considerably reduce CO2 emissions and save significantly on operational costs. Finally, Anchorage is writing a city ordinance that calls for energy efficiency in public buildings.

Anchorage hosted a national conference on climate change, and has been promoting collaborative efforts with neighboring cities, such as Seattle.

The second meeting of the Subcommittee on Winter City Environmental Issues was held in Sapporo, Japan in conjunction with the 2007 Working-Level Officials Meeting of the WWCAM. Representatives of 12 cities from eight countries attended the meeting, reported on past activities, and discussed future activities.

Outline of the meeting
In accordance with the results of the questionnaire, polled to member cities and conducted prior to the meeting, countermeasures against global warming that had been implemented by member cities and other winter cities were reported, followed by discussion of how to manage the subcommittee in the future. Furthermore, Anchorage, Prince George, Maardu and Sapporo introduced specific cases of their own environmental actions.

The interim report on the Subcommittee on Winter City Environmental Issues was presented concurrently with the Mayors Conference 2008 in Nuuk, Greenland. With the participation of 11 cities from seven countries, the activities conducted since the Subcommittee was established at the Mayors Conference 2006 held in Changchun, China were reported, and future activity plans were discussed.

Outline of the meeting
An interim report on the research findings on environmental issues in member cities was reported, and it was wrapped up with the fact that awareness of global warming issues has been steadily increasing in member cities and educational activities have been carried out especially for citizens.

Outline of the meeting
Efforts focused on researching cases of educational activities for citizens regarding global environmental issues were discussed. The cases conducted by the City of Sapporo were introduced followed by report of the results of questionnaire polled to member cities.

As for future initiatives, a common campaign among member cities with a central focus on an electricity-saving is planned to be implemented. It is targeted to eventually formulate a common charter in order to disseminate information and knowledge about environmental issues to citizens. 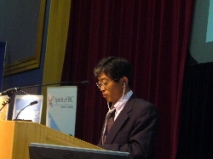 Presentation by the City of 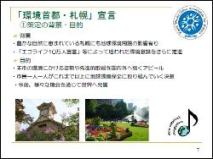 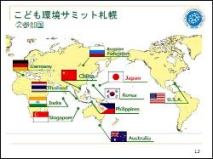 The City of Sapporo aims to become an “Eco-Capital” and implement various environment-related programs, including the Children’s World Summit for the Environment that was held in June 2008.

The city of Sapporo also proposed a new common campaign comprising a display of posters in which the WWCAM will promote global environmental protection. The participants agreed with the proposal and campaign will be initiated in November.

Subcommittee member cities delivered reports on environmental issues. The city of Sapporo presented its initiative, “Slim City Sapporo Plan,” which deals with the challenges the city faces in promoting waste reduction and recycling and the city outlined measures implemented under the plan.

The city of Tromso, Norway presented its public building energy efficiency projects. With the aim of reducing greenhouse gas emissions by 50 percent by 2020, the city has introduced heating systems with water as a heat carrier and heat pumps as the main energy source for public buildings rebuilt in the past few years.

Taebaek, Korea reported on the effects of climate change observed in the city. Some of the examples are the frequency of downpours in summer, a winter season shortened by one month, and shrinking winter-related industries.

Outline of the meeting
The Subcommittee secretariat (Sapporo) took the lead in conducting common campaign twice. Each participating city’s situation and efforts were presented as a result along with the past four-year activities and achievements.

A final report was compiled and distributed to participants